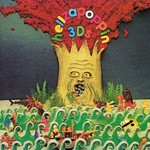 Flying Nun Records and The 3Ds are pleased to announce the 2021 vinyl reissue of Hellzapoppin, due out December 10th. This vinyl reissue has been remastered by long-time friend and engineer Tex Houston, taken from the original tape masters held at the Alexander Turnbull Library.

Hellzapoppin is the first full-length album from The 3Ds. First released on CD in 1992, Hellzapoppin demonstrates the dichotomy of the band's upbeat pop-rockers laden with backhanded lyrics; leaving the listener alone to battle with deceptively captivating songs about ludicrously dreadful things.

This is the second vinyl release of The 3Ds' debut, and features the inherently skewed pop sounds of the 13 original tracks. Opening with the giddy crunch of 'Outer Space', with its flat-out fun melody, plenty of crazy guitar effects, it sets the tone for an album that is both thrashing and tuneful but never pointlessly macho. Instead, amongst the crash, bang and occasional hysterics, songs like 'Ugly Day' and 'Swallow' radiate a great, fun vibe.

Meanwhile, guest performer Alan Starrett adds a few extra instrumental touches during the course of the record, like viola and kalimba on the clattering 'Teacher Is Dead'. Songs like 'Leave the Dogs to Play', with its hollow percussion, heavily treated guitars and vocals, show a band getting more comfortable with studio possibilities, while having a blast with them at the same time.

At the time of release, Spin Magazine picked Hellzapoppin as the "#1 album you didn't hear" - so here's your chance to hear it again, in its finest physical form.

This Hellzapoppin 2021 reissue is out on either opaque purple or standard black vinyl on December 10th, via Flying Nun Records.