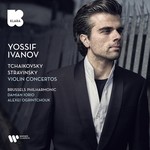 "Pairing Tchaikovsky and Stravinsky's violin concertos on an album seems a somewhat strange choice, but to me it was an obvious one. Both Russian concertos are composed in D Major, probably inspired by the violin concerto par excellence, namely Beethoven's concerto. They are (and will remain) a statement within the repertoire, both instrumentally and compositionally, a clear transition between old and new, and after all this time, they remain as brilliant as they are refreshing". - Yossif Ivanov

Hailed as "a player with impressive authority and presence" (The Strad), Yossif Ivanov won the First Prize at the Montreal International Competition, as well as the Second Prize and the Audience Prize at the Queen Elisabeth Competition at a young age. Belgian Classical radio Klara invited Yossif for a recording in the fine company of Brussels Philharmonic.