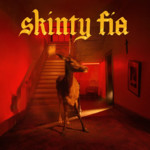 Fontaines DC return with their third record in as many years: Skinty Fia. Used colloquially as an expletive, the title roughly translates from the Irish language into English as "the damnation of the deer"; the spelling crassly anglicized, and its meaning diluted through generations. Part bittersweet romance, part darkly political triumph - the songs ultimately form a long-distance love letter, one that laments an increasingly privatized culture in danger of going the way of the extinct Irish giant deer.