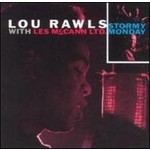 Originally a gospel singer with the Pilgrim Travelers, Lou enlisted into the paratroopers for three years before resuming his singing career with the Pilgrim Travelers. It was whilst touring with the Travelers in 1958, alongside Sam Cooke, that Lou was involved in a serious car accident, with Lou initially being pronounced dead at the scene and spending more than five days in a coma when he got to hospital. It took many months to fully recover, an event Lou was later to claim life-changing. Upon recovery he switched musical styles and was signed by Capitol in 1962, although his debut album would ultimately appear on the Blue Note label. Backed by the Les McCann Trio, Lou proved himself more than adept at jazz, producing a stunning debut album. Whilst his later success would come when he turned his attentions more towards R&B and soul (with more than a hint of pop), Stormy Monday has survived the passage of time extremely well, being as delightful a jazz album now as it was then. It also remains Lou's definitive jazz album.

Bonus tracks:
Blues is a Woman
A Little Less of Lou's Blues
(They Call It) Stormy Monday