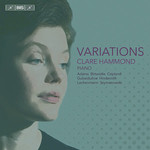 From Szymanowski to Adams - a century and more of piano variations.

For her fifth release on BIS Clare Hammond has constructed an adventurous programme of twentieth and twenty-first-century variations for piano. From the imposing Chaconne by Sofia Gubaidulina, to the tender grief of Paul Hindemith's variations or Aaron Copland's bold and uncompromising proclamation, the disc presents a fresh perspective on the genre. Hammond opens with Karol Szymanowski's Variations on a Polish Theme from 1904, a virtuosic and intensely Romantic outpouring that contrasts strikingly with the wit and irreverence of Helmut Lachenmann's set on a theme by Schubert. The most recent works in the programme are Harrison Birtwistle's mercurial elegy and its polar opposite I Still Play, a lyrical waltz composed in 2017 by John Adams. Described as 'a star interpreter of contemporary music' (The Observer), Clare Hammond has developed a reputation for imaginative concert programming. As she herself admits in her liner notes, variation form may on the surface appear to be both limiting and limited, but the works she presents here transcend the form in myriad creative, and at times daring, ways.

Acclaimed as a pianist of 'amazing power and panache' (The Telegraph), Clare Hammond is recognised for the virtuosity and authority of her performances and has developed a 'reputation for brilliantly imaginative concert programmes' (BBC Music Magazine). In 2016, she won the Royal Philharmonic Society's Young Artist Award in recognition of outstanding achievements. Highlights that year included a performance at the Royal Festival Hall with the Philharmonia Orchestra and a series of three concerts at the Belfast International Arts Festival, broadcast as part of the BBC Radio 3 Lunchtime Concerts series.