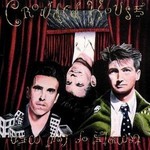 Mastered by Bob Ludwig at Masterdisk.