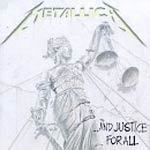 Metallica
...And Justice For All

"The legendary, self-titled "Black album" may be Metallica's best-seller, but their previous album 'And Justice For All', is at least it's equal - if somewhat less obvious in it's status as a classic rock album...

Originally released in 1988 as a single priced double LP, 'And Justice For All' continued the powerful, metallic, momentum of 'Master of Puppets', with Jason Newstead on bass (replacing Cliff Burton, who had recently died in a bus crash). 'Justice' comprises nine lengthy tracks, incorporating many different elements - imagination, aggression, fear, sorrow, anger, freedom and individuality for instance. The way this band interpret emotion into these arrangements is extremely exhilarating!

The song simply called "One" is a most accomplished anti-war statement. The beginning fades in with distant gunfire and harmonious guitar work, complimented with sad, tuneful lyrics. It turns bitter for two lines of chorus, then back into more delicate, classical-style playing from both Kirk Hammett and James Hetfield. Suddenly, everything transforms into a chunky, spasmodic attack as the "One" person is plunged into darkness - a land mine has taken his sight, body and soul. After an intense, urgent musical peak, "One" is no more.

"Eye Of The Beholder" must be one of the meanest riffs to ever walk the Earth and deals with life's harsh realities, along with the need for independence. Lars Ulrich is a phenomenal drummer and on "Beholder" he really puts his twin bass drum pedals to the test.

Whether it's the layered intricacies of the title track, the chanting rhythms of "Frayed Ends of Sanity" (with a sample from 'The Wizard of Oz'!), or the speedy, mad dash to the finish of "Dyer's Eve" - all of 'em are winners! When Metallica put out records, they strived to make the new recording even better than the last one - it was inconceivable that they could ever top this.

'And Justice For All' is a landmark heavy rock album that deserves thousands of thorough thrashings. If you are not familiar with this Metallica masterpiece, it is recommended that you do so at once!"
- GEOFF

Blackened
...And Justice for All
Eye of the Beholder
One
The Shortest Straw
Harvester of Sorrow
The Frayed Ends of Sanity
To Live Is to Die
Dyers Eve