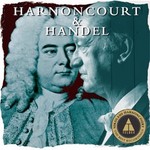 Once dubbed the high priest of "authenticity", dread word, Nikolaus Harnoncourt, cellist, early music specialist, author and conductor has long been both plausible and consistent in his denial of the accusation. "I would never use the word authenticity for my work", he says. "It can only be authentic 'me', not authentic Bach, Biber, Handel or Telemann. Old instruments produce the best sound for this repertory but they do not necessarily produce the sound of the period."

Nowadays, even the "early music" label can no longer be applied with undue emphasis to Harnoncourt, for he has become, over the past twenty-five years or so, as identifiable an interpreter of Classical, Romantic and twentieth-century music as he has remained in the Baroque sphere on which his reputation was established. Indeed, since his set of Beethoven symphonies for Teldec was named Record of the Year in the 1992 Gramophone Awards, Harnoncourt has performed and recorded all the Schubert symphonies (Teldec), as well as symphonies by Haydn, Mozart, Schumann, Brahms, Dvorák and Bruckner, and a wide range of vocal and choral music from the seventeenth to the twentieth centuries.

"For me the emotional responses in music are the most important. Authenticity and performing practice are always in danger of becoming dogmatic. Besides musical value, an opera must have a message as a wok of art which is not bound just to its own time. The drama must be so timeless in its depiction of human psychology that you can forget it is three hundred years old, or whatever. Monteverdi is such a composer, Handel another." Happy birthday, maestro, and many happy returns of the day!

Alexander's Feast or The Power of Music, HWV 75: Part I No.13 Chorus: The many rend the skies with loud applause
Chorus Stockholm Bach Choir
Orchestra Concentus musicus Wien