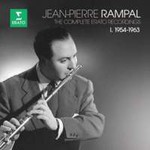 Ushering in a new golden era for the flute as solo instrument, Jean-Pierre Rampal secured his place in the classical music firmament as the greatest flautist of the modern era. Over 25 years (1954-1982), the French virtuoso's fruitful collaboration with Erato grew into a truly exceptional achievement in recording history: an encyclopedia of flute music in vital performances that have remained the benchmark for generations. The first complete reissue of these recordings represents the most important collection ever dedicated to a single flautist. After all, it was Jean-Pierre Rampal that taught us to love the flute.

Jean-Pierre Rampal became the first exponent of the solo flute in modern times to establish it on the international concert circuit, and to attract acclaim and large audiences comparable to those enjoyed by celebrity singers, pianists, and violinists.

His playing style was characterised by an exceptionally beautiful sound and a phenomenal virtuosity, but above all a magnificent intuition and sense of expression. Highly refined musicality, impeccable taste, elegance of phrasing, subtlety of tone colours, stunning sense of communication, irresistible presence and spirituality... all extraordinary qualities which marked generations and generations of music lovers and musicians. Rampal is also well known for recovering a vast number of flute compositions from the Baroque era - with Erato team complicity, and spurring contemporary composers, such as Francis Poulenc, to create new works that have become modern standards in the flautist's repertoire. His flair and presence paved the way for the next generation of flautist superstars such as James Galway and Emmanuel Pahud.

The rebirth of Erato provides the perfect opportunity to realise a wonderful project: the first issue on CD of the complete recordings of the legendary leading light of the twentieth century French flute school, Jean-Pierre Rampal. His melting tone, inimitable phrasing, extraordinary personality, boundless virtuosity, unstoppable determination to expand the repertoire, his irresistible charisma, unquenchable enthusiasm for his instrument, his remarkable generosity and unstinting encouragement of young musicians... these are all the qualities that made him the equal of a Rostropovich or a Stern and meant that he was uniquely qualified to bring music to a wider audience through the flute. During the post-war golden age of the LP, he made recordings at a rate that is hard to imagine, setting down interpretations that are often fervent, fiery, intense, and always irresistible. This, in my view, is a collection of key recordings spanning the 30 years when Jean-Pierre Rampal's artistry was at its very peak.