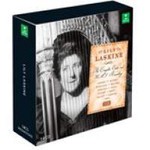 The harpist Lily Laskine (1893-1988) was a popular and influential figure whose name was particularly closely identified with the Erato label, although she also recorded for EMI.

She made her first recording for Erato - Mozart's Concerto for Flute and Harp with Jean-Pierre Rampal - in 1958, when she was already 65. She made her last Erato recording 23 years later.

Her stereo remake of the Mozart concerto (again partnering with Rampal), recorded in 1963, remains an all-time classical bestseller in France

Laskine had a rich and colourful career as both an orchestral player and as a soloist. As she herself said: "I was conducted by Toscanini, Bruno Walter, Furtwängler; I played with Richard Strauss himself ... I knew Maurice Ravel very well, and I did premier the audition of the celebrated Boléro, directed by Ravel himself." Among other conductors with whom she worked were Charles Munch and Serge Koussevitsky. Roussel's Impromptu (included in this box) was dedicated to her.

During World War I, she became the first woman to play in the orchestra of the Paris Opéra. When the Orchestre National de France was created in 1943, she became its harpist.

Laskine also recorded with many popular artists, including Maurice Chevalier, Edith Piaf, Charles Trenet and Tino Rossi; she worked on numerous film scores, and for many years played harp at France's most prestigious theatre, the Comédie Française.

[Ravel: Introduction & Allegro] "... this is a gentle but persuasive approach which has moved me more than several others of apparently equal skill." Gramophone

Boieldieu:
Concerto for Harp and Orchestra in C