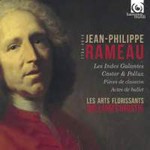 250 years after his death, Jean-Philippe Rameau continues to fascinate, as is shown by the number of new productions of his operas scheduled for 2014 and beyond. However, the Dijon-born composer also owes some of his current popularity to the passionate advocacy of William Christie: this sumptuous box set presents the critically-acclaimed Rameau recordings he made for harmonia mundi in the 1980s and 1990s. Its selection of opéra-ballet, tragédie lyrique and harpsichord pieces on 10 cds, many unavailable for some time, highlights the multiple facets of Rameau's oeuvre, masterfully interpreted by the American Baroque pioneer so completely at home in French music. A must!

"These could be creaking performances after the passage of so much time but they're not are they, they're still vital and this set as a whole makes a very cost effective guide for anyone who's got a Rameau shaped hole on their record shelves in his anniversary year … 10 CDs, budget price, and, very important, nicely presented with notes, text and translations so that's a definite plus." CD Review, 18th October 2014