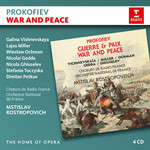 Prokofiev composed his adaptation of Tolstoy's mighty War and Peace during World War II. In 1986, as the Cold War entered its final phase, the exiled Mstislav Rostropovich conducted this superb recording of the opera with his wife, Galina Vishnevskaya, in the central role of Natalya Rostova. Rostropovich had been Prokofiev's student and knew him well. "At the end of his life," he wrote, "Prokofiev was obsessed with the hope that one day his greatest masterpiece, War and Peace, would triumph in its definitive form … Now I fervently hope that this recording will satisfy my old friend."

"In Rostropovich's powerful reading one revels - thanks to the lively Erato recording - in the vividness of the atmosphere, both in the evocative love scenes and ball scenes of the first half and in the high tensions of the battle scenes in the second." - Rosette - Penguin Stereo Guide