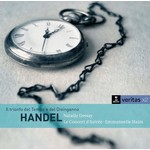 "In Pleasure's aria 'Lascia la spina', Ann Hallenberg's simplicity and natural-sounding da capo decorations are riveting, as is the subtle theorbo continuo. Technically superb, reassuringly stylish, this is an outstanding performance of Handel at the height of his powers."
BBC Music Magazine Disc of the Month May 2007

'Technically superb, reassuringly stylish, this is an outstanding performance of Handel at the height of his powers and enjoying Oscar-like acclaim in Italy. Haim and her outstanding solo team are in turn graceful, imaginative, stylish and immensely exhilarating in this splendid recording.'
BBC Music Magazine Award Winner 2008: Opera

"Written in 1707, when Handel was only 22, Il Trionfo del Tempo e del Disinganno is probably the most remarkable of his early scores, and certainly the strangest. Essentially, it's a philosophical dialogue in which the allegorical figures of Time and Enlightenment gradually break Pleasure's ascendancy over Beauty and turn the latter's thoughts towards God. Its stance is Platonic rather than Christian, and the astonishing music anchors contemplation of the divine in the sensuousness of worldly experience.
Emmanuelle Haïm's recording with Le Concert d'Astrée was made in Paris in 2004, prior to a European tour, which included an unforgettable performance at the Barbican. In place of Veronica Cangemi, who sang the role of Beauty in London, the recording has Natalie Dessay, thrillingly accurate in all her coloratura, and offering a characterisation of striking subtlety and psychological insight. Otherwise, the cast is the same, with mezzos Ann Hallenberg and Sonia Prina rivalling each other in prowess as Pleasure and Enlightenment, while tenor Pavol Breslik is electrifying as Time. Haïm's conducting is similarly faultless. One of the great Handel interpretations of our time." ***** 5 stars out of 5 - GUARDIAN.CO.UK

Emmanuelle Haïm continues her survey of vocal works from Handel's early career in Italy with his first oratorio, Il trionfo del Tempo e del Disinganno, written in 1707 to a highly moral libretto by his patron Cardinal Pamphili. Natalie Dessay is Beauty (Bellezza), in thrall to Pleasure (Piacere), but warned by Time (Tempo) and Enlightenment (Disinganno) to abandon her life of thoughtless diversion and turn to higher things. Far from the dry allegory it might have been, the exchanges between the four characters offered Handel the opportunity for music of great variety and inventiveness. Handel himself puts in an appearance as a 'graceful young man' playing the organ in the palace of Pleasure, while the ethereal violin solo in the penitent Bellezza's ravishing final aria was almost certainly first performed by Corelli. The work became the source of the English oratorio The Triumph of Time and Truth, from the very end of Handel's life, but the original is arguably the more exciting, and in this vivid performance captures the sense of musical adventure that Handel must have felt during his first months in Italy.

Emmanuelle Haïm and Le Concert d'Astrée performed Il trionfo del Tempo e del Disinganno at London's Barbican in March 2005 with the cast, Natalie Dessay excepted, of this recording. Reviewing the concert for The Guardian, Tim Ashley wrote: 'Emmanuelle Haïm's performance with her ensemble Le Concert d'Astrée was a thing of wonder: at once profound, sensual, witty and immaculate. The singing was phenomenal. A gorgeous evening, every second of it.'