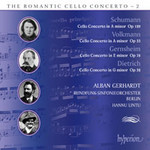 'Gerhardt invests Volkmann's mixture of melodic lyricism, wit and technical bravado with a brilliant sense of pacing and the urgent accompaniment of the Berlin Radio Symphony Orchestra under Hannu Lintu easily outclasses the rival account on CPO' (BBC Music Magazine) *****

'Alban Gerhardt is no lofty aristocrat of the cello. He throbs and hugs in kaleidoscopic hues: activities crucial in this disarming 19th century collection. The Schumann concerto, persuasively dispatched, is the most familiar, but Gerhardt makes an equally strong case for lively novelties by smaller figures, Robert Volkmann and Freidrich Gernsheim' (The Times)

Praised for his 'passion and sensitivity' by BBC Music Magazine for Volume 1 of this series (CDA67544), Alban Gerhardt turns his attention to works by four of his compatriots for this second volume in Hyperion's Romantic Cello Concerto series. This disc includes the Schumann cello concerto, unperformed until 1860, and recordings of concertos by Schumann's contemporaries, Volkmann, Gernsheim and Dietrich.

Complete Works for Cello and Orchestra