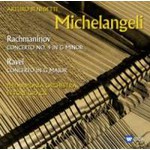 Arturo Benedetti Michelangeli brings his proverbial refinement and technical mastery to two works composed within a few years of each other: Ravel's exquisite, jazz-inflected G major concerto and Rachmaninov's 4th concerto, more discreetly Romantic than its two much-loved predecessors. With his infinitely subtle gradations of colour and touch, Michelangeli proves characteristically mesmerising in both.

"There are few records in the catalogue more worthy of being described as a "Great Recording of the Century" than Michelangeli's superb coupling of Rachmaninov and Ravel. The current remastering has been expertly managed and at mid-price it should be included in even the most modest collection."
- Rosette Recording. Penguin Stereo Guide.

"In one way or another most of the recordings in this section respond vividly to the excitement of Rachmaninov's dramatic climaxes but with Michelangeli these climaxes seem to burst through the music of their own volition, as though an irresistible force of nature has been released. It's this crowning of a structure by release, rather than by extra pressure, which gives the performance a sense of exaltation and which more than anything else sets it on a different level. It enables him to be freer in many details, yet seem more inevitable as a whole." (Gramophone)