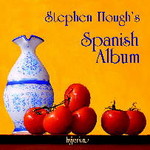 'Hough has a more intimate stance than many pianists. It's a superb and surprising recital' (BBC Music Disc of the Month December 2006)

'Hough has a more intimate stance than many pianists. It's a superb and surprising recital'
(BBC Music Disc of the Month December 2006)

'Stephen Hough is among the most intellectual of contemporary pianists; but he's also among the most playful and tonally poetic keyboard artists... The unashamedly romantic reading of the Soler Sonata that opens the programme sets up the perspective: extremely flexible tempos, all-embracing colours, an exceptional range of articulation, and a subtle observation of polyphony that leads to characterized conversations among the music's competing voices... Hough's own On Falla brings the collection to a whimsically brilliant close... An ear-caressing release.
(International Record Review)

Stephen Hough's latest solo album takes us on a colourful tour of Spain and all things Spanish. Works by Antonio Soler, Granados, Albéniz, Mompou and Federico Longas are followed by Spanish-influenced music from Debussy, Ravel, Godowsky, Scharwenka, Niemann and finally Hough, all unable to resist this richest of cultural experiences.