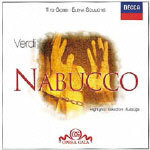 This is where the Chorus of Hebrew Slaves comes from!

Decca's catalogue of opera recordings is unmatched. Artists of the calibre of Luciano Pavarotti, Dame Joan Sutherland, Renata Tebaldi and Sir Georg Solti have recorded the definitive versions of many of the most popular operas in the repertoire. OPERA GALA draws on this archive of excellence.

This album offers highlights from the complete recording of Verdi's early opera, Nabucco (417 407).
Of Verdi's early operas, it is Nabucco which remains at the forefront, enjoying countless productions at major opera houses throughout the world. Its "epic scale" concept makes it ideal for spectacular productions, especially in the open air at places like the arena at Verona. And, of course, it has that immortal choral "hit", the Chorus of the Hebrew Slaves, as a considerable added bonus.

As well as its memorable choruses, this opera contains two of Verdi's greatest dramatic singing roles — the King himself (Nabucco) and his evil scheming daughter, Abigaille — and here they are taken by two singers who have never been matched in these roles on disc since this recording was first released in 1965. The immensely experienced Tito Gobbi gives a superb characterisation of the complicated role of Nabucco and the astonishing young Greek soprano, Elena Souliotis, in her debut recording, gives the performance of a lifetime with thrilling attack and tone, and a performance of her great 11-minute Act II scena which keeps one on the edge of one's seat with excitement.


"This Decca performance is a fine piece of work and must form a cornerstone of any Verdi collection ... Elena Souliotis is young and exciting. The timbre, the dark thrilling colours, the force and freedom of her singing, again and again bear an uncanny resemblance to those of the young Callas ... Souliotis has power, spirit and fire ... Tito Gobbi's performance has the expected dramatic power and incisiveness. The voice is strong, the effect commanding ... The Vienna chorus, very important in this piece, is splendid ... Lamberto Gardelli captures the youthful excitement of the score and also its grandeur. Both playing and recording do full justice to the richness and originality of the young Verdi's invention ... This Nabucco comes closest to our ideal of a Verdi performance, the whole opera brought glowingly to life as a drama-in-music"
Gramophone

I Lombardi (Complete opera recorded in 1972)

I due Foscari (Complete opera)