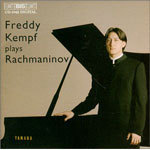 Freddy Kempf's first disc, devoted to the music of Robert Schumann (BIS-CD-960), caused considerable ripples in the world of piano music. He returns with some striking performances of Rachmaninov's Second Sonata and the second book of Études tableaux, which will surely reinforce his reputation as one of the most interesting pianists of his generation.