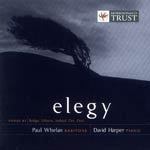 Paul Whelan (Baritone)
Born in New Zealand, Paul Whelan studied at the Wellington Conservatoire and then when on to the Royal Northern College of Music in England, where he won several prestigious prizes and scholarships. In 1993 he won the Lieder Prize in the Cardiff 'Singer of the World' competition.

He pursues an active concert and recital career. Engagements have included concerts under Rattle, Bertini, Nagano, Hickox, Menuhin, Siniasky, Olmi and Willcocks. He has performed with many leading UK orchestras, as well as the Budapest Symphony Orchestra. He has given recitals at the Wigmore Hall, St David's Hall Cardiff, the Blackheath Concert Halls, the Cheltenham Festival, for BBC Pebble Mill, all accompanied by Julius Drake; and most recently at the Châtelet Theatre in Paris, accompanied by David Harper. Other recent recordings include A Midsummer Night's Dream with the LSO under Sir Colin Davis and Kurt Weill's Silbersee under Markus Stenz.

David Harper (Piano)
David Harper was born in New Zealand and early success as an aspiring concert pianist there led him to London in 1967 to further his studies at the Royal College of Music. However, an overwhelming passion for the vocal repertoire and the voice soon eclipsed his ambition to pursue a solo career and within a few years of leaving college he had achieved his dream to work exclusively with singers.

David spent four years at the English National Opera which provided the invaluable experience of working with all voice types in a broad range of operatic styles. In 1976 he launched his freelance career and invitations to perform concerts with a variety of singers followed in quick succession.

Masterclasses and vocal workshops dealing with style, interpretation and vocal technique as well as guest professorships and teaching residencies throughout Europe, Japan, the USA and Australasia feature largely in his current professional activities.

Recent recording projects include the two volumes of Mercadante songs with Nelly Miricioiu, Yvonne Kenny and other soloists for Opera Rara.

Frank Bridge:
Adoration
Go not, happy day
Love went a-riding
Douglas Lilburn:
The Hollywood Valley
Now he is dead
Now sleeps the gorge
Reverie
Driftwood
Wind and Rain
Farewell
The Laid-out body
John Ireland:
Great Things
Sea Fever
When lights go rolling round the sky
CW Orr Cycle from 'A Shropshire Lad'
Along the field
When I watch the living meet
The Lent lily
Farewell to barn and stack and tree
Oh fair enough are sky and plain
Hughley Steeple
When smoke stood up from Ludlow
Gerald Finzi:
Come away, come away, death
Who is Sylvia?
Fear no more the heat o'the sun
O mistress mine
It was a lover and his lass