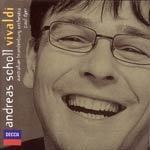 "Yet another superb disc from the honey-toned countertenor Andreas Scholl, partnered here by a fine baroque ensemble from Australia. Voluptuously packaged"
Recording of the Month - Gramophone Magazine (October 2000

"Scholl's voice is pure and beautiful in sound, his taste exquisite, his pitch and diction immaculate. It is inadequate to compare Andreas Scholl to many other countertenors now working, even the finest of them. Instead, one is put in mind of legendary past masters."
Fanfare

"Yet another superb disc from the honey-toned countertenor Andreas Scholl, partnered here by a fine baroque ensemble from Australia. Voluptuously packaged"
Recording of the Month - Gramophone Magazine (October 2000)

With a most impressive discography to his name, Andreas Scholl is regarded as the outstanding countertenor of his generation. Since signing an exclusive contract with Decca in 1998 his star has been rising further still; Heroes, a portrait disc of arias by Mozart, Handel, Gluck and Hasse, won him much acclaim as well as the Editor's Choice in Gramophone Magazine. "This is some of the finest heroic singing I can remember hearing (...) this is quite an exceptional recital in which one of today's most beautiful and imaginatively used voices is heard." (Gramophone) Pergolesi's Stabat Mater with fellow Decca artists, Barbara Bonney and Christophe Rousset conducting Les Talens Lyriques, was also very well received. In December 1999 Andreas Scholl was awarded with the Young Musician of the Year Prize of the Belgium Music Press.

Scholl's Decca album of Vivaldi Cantatas and Nisi dominus has been released for the summer of 2000. He recorded Vivaldi with the Australian Brandenburg Orchestra conducted by Paul Dyer, after some successful concerts in Sydney. "From the two exuberant motets to the more emotionally complex Nisi Dominus setting, Scholl's performance was totally captivating" (The Sydney Morning Herald). In late 2000 A Musicall Banquet with Spanish, French, Italian and English repertoire will be released.