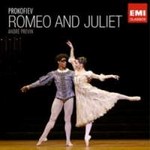 "Andre Previn recorded the complete ballet in 1973 and on CD it is as good as ever. Orchestral playing and recorded sound are better than Gergiev's - so track it down" (Rod Biss Sunday Star Times)

"Now reissued at bargain price this must be now be one of the best bargains in town, although it must be emphasized that this remains a very strong contender even if it remained at full price."
(Prokofiev official website)

André Previn was born in Berlin on 6 April 1929 of Russian Jewish parents.

In 1938 Previn and his family left Nazi Germany for Paris where he studied at the Conservatoire, and in1939 they immigrated to America. While still at school in Los Angeles, Previn began to work in Hollywood as an orchestrator and arranger of film scores.

During the mid 1940s he developed an interest in jazz and made a number of recordings with his own trio, and also continued to work free-lance as a composer and conductor on musical films, for which he won four Oscars between 1958 and 1964. But his interest in classical music continued to develop.

He made his debut as a classical conductor in St Louis, and in 1967 he succeeded Sir John Barbirolli as music director of the Houston Symphony Orchestra. In 1969 he became principal conductor of the London Symphony Orchestra, with whom he quickly produced an extensive catalogue of successful recordings, and throughout the 1970s he established himself as a leading conductor and populariser of classical music.

In 1977 he became musical director of the Pittsburg Symphony Orchestra, and was later associated with a number of other major international orchestras in the USA and Europe.

For further titles in this series type "EMI Gemini" into search