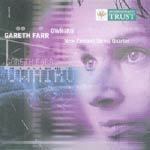 "Farr's music is not espcially profound but it is spendidly alive. Performances by the New Zealand Quartet are outstanding throughout!"

Gareth is now recognised as one of New Zealand's most important composers, and his list of forthcoming commissions bears witness to this. Recently, his works have been performed by the New Zealand String Quartet, CadeNZa, the New Zealand Symphony Orchestra, the Auckland Philharmonia Orchestra and the Penn's Woods Festival Orchestra (in Pennsylvania, USA). In March 1997, the premiere of From the Depths Sound the Great Sea Gongs (commissioned by the New Zealand Symphony Orchestra to celebrate its 50th anniversary) was received to standing ovations, and the orchestra has performed the work several times since then.

Gareth's alter ego, Lilith Lacroix, has performed her DRUMDRAG show to sold-out houses, won a fashion award at the Trentham races wearing her own high-fashion handiwork, appeared in television commercials, and has recently recorded a pop single of the DRUMDRAG theme song.