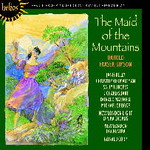 'A quite outstandingly successful re-creation of the work ... it is a hugely important contribution to preserving our British musical theatre heritage' (Gramophone)

Hyperion's recording of The Geisha, issued in January 1999 (CDA67006), produced an enormous approving postbag from which we discovered that there is still a strong affection for English musical comedies from the early years of the last century. Encouraged by its success we have now recorded The Maid of the Mountains, the smash hit of 1917. A more romantic tale than The Geisha, it has probably even more 'hit' numbers, the most famous of which are A bachelor gay ('At seventeen he falls in love quite madly...'), Love will find a way ('Whate'er befall, I still recall that sunlit mountainside, where hearts are true, and skies are blue, and love's the only guide'), Husbands and wives and A paradise for two. There are also humorous interludes from Richard Suart (I understood and Dirty work). Altogether well over an hour's worth of tuneful and good-natured entertainment with a strong cast directed by the master of English light music, Ronald Corp.

ACT 3
Introduction and Chorus of Fisherfolk 'When each day the tides are ebbing and flowing' [3'02]
'Good people, gather round' (The Governor, Teresa, Fisherfolk) [2'43]
Duet 'When you're in love' (Teresa and the Governor) [3'21]
Words by Clifford Harris and 'Valentine'; music by James W Tate
Duet 'Over here and over there' (Vittoria and Tonio) [4'24]
Finale 'When each day the tides' (Fisherfolk, Teresa, Baldassare) [3'09]