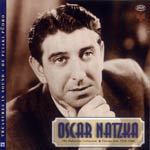 "In sum, a terrific disc, with the voice beautifully captured in the new transfers."
International Record Review April 2001

The following is the National Library's press release:
Issued jointly by the National Library of New Zealand and the Auckland-based company Atoll ltd, "Oscar Natska: The Definitive Collection" presents for the first time every known recording by this great artist. Of the 73 tracks, 27 have not been previously issued. The 4-CD set includes not only all of his commercial discs recorded for Parlophone and Columbia, but also rare live recordings, broadcasts, test pressings, auditions and film soundtracks from Canada, the USA, England, Australia and New Zealand.

Natska's career (the spelling was changed from Natska in 1947) encompassed Covent Garden and the New York City Opera as well as international tours and recording contracts. At an age when most basses are approaching their finest years, Oscar Natska collapsed in New York during a performance of
Wagner's "Die Meistersinger" and died a week later. He was just 39 years old.

Without a doubt the world was robbed of one of the most impressive bass voices of the era. When recorded anthologies of the great bass voices are compiled, the name of Natska is always up there with the likes of Fyodor Chaliapin and Boris Christoff. Now with the issue of "Oscar Natska: The Definitive Collection" his magnificent voice is preserved to inspire and entertain future generations.