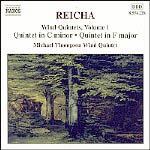 The first of many recordings!!

Born in Prague in 1770, Antoine Reicha ran away from home at the age of ten, believing that his widowed mother could no longer afford his education. His uncle, who finally adopted him, was to teach the young man to play violin, piano and flute. Composing was his objective, and after some nomadic years, he eventually settled in Paris. Operatic failures had little effect on his growing stature as a composer, and in 1818 he was appointed professor in composition at the Conservatoire, Berlioz and Liszt being among his students. His catalogue of compositions includes many operas, symphonies, concertos, large-scale choral works, and a vast collection of chamber music. The Wind Quintets, always regarded among his finest scores, possess an abundance of melodic invention, the quintet's tonal colours so skilfully and charmingly explored.

Reviews:
"Anton Reicha, originally born Antonin Rejcha in Prague, was a friend to both Haydn and Beethoven. While translating French for them, he became preoccupied with change, going so far as to advocate doing away with barlines in music. His radical ideas did not make their way into his woodwind quintets, which are inventive yet thoroughly rooted in late Classical and early Romantic harmony and rhythms. Reicha made this particular combination of instruments 'his', and became renowned for his quintets, which rivaled the quartets of Haydn in popularity. The two works presented on this entertaining CD are the last numbers of two different sets--Op. 88 and Op. 91. Sprightly tunes and clever melodic invention abound in both, and the players are each given ample opportunity to shine in virtuoso displays, notably the clarinet and bassoon in the trio of the C minor Quintet's Menuetto and the horn in the Meneutto of the F major. But superb playing is required in every movement of these works, and the Michael Thompson Wind Quintet players are up to the task, turning in some outstanding solo turns and a lot of cohesive ensemble playing as well. The recorded sound is just right--intimate but not close up enough to catch the distracting clacking of keys."
- Classics Today (Rad Bennett), October 9, 2000


"The prolific Czech-born, Paris-resident composer Antoine Reicha (1770-1836) is now remembered for his music for wind quintet. In his time, he was an important theoretician, respected by the likes of Beethoven and Berlioz, and he speculated about such things as writing an octet for wind that would also be performable as separate quartets in different keys, and quarter-tone notation for declamation. On top of his remarkable sensitivity in writing for wind, Reicha was an accomplished contrapuntist, and his quintets are among the finest of their kind. The Michael Thompson Wind Quintet's latest offering on Naxos is of two works published in 1817 and 1818, the Quintets in F, Op 88 No 6, and in C minor, Op 91 No 6. The recording opts for clarity of separation rather than the characteristically-blended sound of a quintet in the concert hall."
- Irish Times (Michael Dervan), July 7, 2000