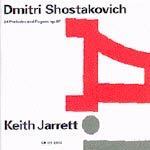 Shostakovich given the Keith Jarrett style

Born May 8, 1945, in Allentown, Pennsylvania, Jarrett began playing the piano at the age of 3 and undertook classical studies throughout his youth - appearing in programs at the Academy of Music in Philadelphia and at Madison Square Garden. He began formal composition studies at 15, before moving to Boston to study briefly at the Berklee School of Music. While still in his late teens, arrangements were made to study composition in Paris with the great pedagogue Nadia Boulanger, but then cancelled in favor of moving to New York to play jazz.

In 1966 he joined the Charles Lloyd Quartet, one of the most popular groups on the international jazz scene. In the late '60's, he formed his own trio with Charlie Haden and Paul Motian which in 1972 expanded to a quartet with the addition of tenor saxophonist Dewey Redman. The group disbanded in 1976. And in 1970/71, Jarrett played electric piano and organ with Miles Davis - his last stint as a sideman; thereafter dedicating himself to performing acoustic music as a leader.

Since 1983, Jarrett's jazz playing has been focused in the Standards Trio, with bassist Gary Peacoc and drummer Jack DeJohnette which explores the American songbook of the '30's, '40's, and '50's.

Several Jarrett compositions have received their premieres at major music centers. Celestial Hawk premiered in 1980 with Christopher Keene and the Syracuse Symphony at Carnegie Hall. Sonata for Violin and Piano and Elegy for Violin and String Orchestra both debuted in 1985 in Tokyo, performed by Koichiro Harada and the New Japan Symphony. Elegy had its American premiere in 1986 at Saratoga Springs, with Dennis Russell Davies and the Philadelphia Orchestra. Sacred Ground, for piano, flute, cello, and clarinet, commissioned by the Chamber Music Society of Lincoln Center, premiered in 1985 at Alice Tully Hall, with Jarrett joined by Paula Robison, Fred Sherry and Richard Stoltzman.

Two books about Jarrett have been written: Keith Jarrett: Inner Views by Kunihiko Yamashita and Keith Jarrett: A Man And His Music, a biography written by British jazz trumpeter and critic Ian Carr.