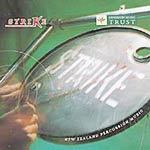 "Fans of percussion music or other drum ensembles are encouraged to give this album due attention. Just make sure you don't turn it up too loud"
- MusicWeb April 2005

"The booklet notes are informative and the recording is clean and true....but warn your neighbours first: the disc must be played at high volume."
- International Record Review (Nov 2000)

"Fans of percussion music or other drum ensembles are encouraged to give this album due attention. Just make sure you don't turn it up too loud"
- MusicWeb April 2005

The HRL Morrison Music Trust is pleased to announce that its CD STRIKE - NZ Percussion Music has won the Classical Award in the 2001 New Zealand Music Awards.

STRIKE is a high-energy drumming group whose flexible line-up is drawn from amongst New Zealand's most outstanding percussionists. Founded in 1993, STRIKE is committed to developing the unique and diverse world of New Zealand percussion music, actively commissioning and performing works by leading New Zealand composers.

STRIKE has also ventured into exploration of the theatrical and physical aspects of percussion, leading to the development of a movement-based show, Cube, which was premiered at the 1999 Melbourne International Festival of the Arts, and later seen at the New Zealand Festival 2000.

Following the critically-acclaimed season of Smashing Sweet Vixen with the Royal New Zealand Ballet in 1998, STRIKE have gained a greater profile at home and overseas. Recent projects include performances at the opening of the Louis Vuitton Global store in Sydney, This Is It millennium celebrations in Auckland, the New Zealand Symphony Orchestra's Turn of the Tide series, the Christchurch Arts Festival, the APEC leaders' dinner in Auckland and a tour as soloists with the New Zealand Chamber Orchestra.

For their recording debut, STRIKE have chosen a varied programme to showcase different aspects of their talents. Works range from the full-on excitement and energy of Gareth Farr's Volume Pig and the Cook Islands log drum piece Taku Manu E, to the intricacy and subtle textures of Ricochet and Iron Tongues. The centerpiece of the album is Cube, which has been such a success at the 1999 Melbourne International Festival of the Arts and the New Zealand International Festival 2000.