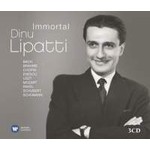 On this occasion we issue a 3CD collection including his Concerto album with Herbert von Karajan, a CD of works by Chopin, Liszt, Ravel, Brahms and Enescu, and his Last Recital in Besançon, recorded only two and a half months before his tragic death in 1950.

All three CDs are also in the Icon box dedicated to the pianist (5099920731823) but the Besançon Recital included here benefits from a 24-bit/96kHz remastering made for a Japanese SACD edition in 2011.