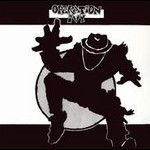 After Operation Ivy called it quits at the end of the '80s, Lookout put together this compilation of all of the recorded studio material ever released by the group. Much like Minor Threat's Complete Discography, this follows the recorded history of a band that burnt out quickly and had a relentlessly creative view of punk music. The underground classics are all here: "Take Warning," "Unity," "Freeze Up," "Junkie's Runnin' Dry," and 23 other prime tracks. Being one of the first bands to pursue the ska punk sound in California, Operation Ivy was a trailblazer in a genre that quickly became generic due to a glut of like-minded artists. But this should not be held against the group because they made fantastic music for the short time they existed. The CD comes complete with the lyrics to all of the songs, and several good pictures of the band. Countless bands would ape this sound without any creative improvement throughout the '90s, and two of the members would go on to lead the more punk-influenced Rancid. This might be the best ska punk collection by a single band committed to disc, and anyone with even a passing interest in the genre should do themselves a favor and buy this album right away. ~ Bradley Torreano, All Music Guide