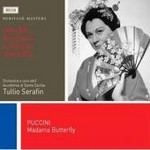 "There are few accounts of the role that are more securely, more gloriously sung, and with a voice that seems without a flaw throughout its register. So many more convincingly childlike Butterflys simply have no lower notes to speak of, or are incapable of the cruelly demanding outburst of "Tu, tu, piccolo lddio", that it is splendid to hear in the role a voice that you know will not be found wanting at any point. And few Butterflys have been more ardently and sympathetically partnered than by Bergonzi, here in his finest voice: the love duet is superbly done."
(Gramophone)

Madama Butterfly (Cio-cio-san) has renounced her family and traditions to marry an American officer, Pinkerton. He returns to America and during his absence Butterfly gives birth to his child. Three years pass before he returns… with an American wife. Butterfly gives the child an American flag to play with as she commits suicide.

• love duets abound in opera and one of the most beautiful and ecstatic is that which closes Act One when Butterfly and Pinkerton sing of their love for one another: "Viene la sera … Vogliatemi bene"

• Madama Butterfly was a massive failure when it was first performed at La Scala in Milan in February 1904 and Puccini continued to revise it until he arrived at the definitive version which was given in Paris in December 1906; today the opera is one of the most popular and regularly performed of all Italian operas

Puccini Gold: The 30 most popular arias