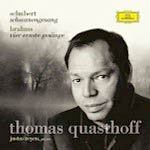 Schwanengesang was composed in the last year of Schubert's life

Though often called a song cycle, Schubert's Schwanengesang is in fact a collection of 14 lieder, all composed in the last year of Schubert's life, 1828. His publisher, Tobias Haslinger, posthumously assembled the songs into this cycle, sentimentally naming it Schwanengesang (Swansong). The cycle was published a year after Schubert's death.

Quasthoff has a long-standing knowledge of both these lieder collections. "I've sung both cycles in recital... . The Four Serious Songs have in fact accompanied me almost from the beginning of my singing career."

Quasthoff says of the Brahms songs: "The colours are crucial: they must be dark, severe and sombre." With four biblical texts pervaded by self-doubt, a longing for death and yet an unshakeable faith in love, Brahms took his leave of the genre he had brought from its classical roots to the verge of the Second Viennese School. In so doing he created a musical monument to his unfulfilled love for Clara Schumann.

The German bass-baritone Quasthoff has become an established name in the roll call of international singers. He possesses a rich, powerful voice, which boasts an originality in the extraordinary range of colours with which he communicates the text he is singing. "Basically, in everything I sing, I try to create a particular kind of emotion and truth", because "the more honestly one makes music, the more that is communicated to the audience."

This disc is the follow-up to the highly acclaimed solo début of Thomas Quasthoff with Brahms and Liszt lieder last year. That disc became the winner of a Cannes Classical Award and was nominated for a US Grammy Award.