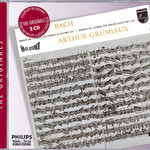 1001 Recordings to hear before you die - "Grumiaux comes closer than any other violinist I have heard to an ideal performance ..There is a kind of honesty to Bach's intentions here...that I find deeply impressive and often very exciting." Gramophone

"Grumiaux comes closer than any other violinist I have heard to an ideal performance ... There is a kind of honesty to Bach's intentions here ... that I find deeply impressive and often very exciting."
Gramophone

Belgian violinist Arthur Grumiaux was hailed as one of the finest Bach players of his generation.
Each sonata and partita has several movements. The longest of all is the last movement of the Partita No.2, the famous Chaconne. (Brahms made a piano version of this to be played by the left hand alone - and a dismembered hand played it in the 1948 horror film The Beast with Five Fingers!)

Here for the first time on CD are the sonatas for violin and harpsichord, BWV 1016 & 1017, played by Grumiaux and Egida Giordani Sartori.

They join some of the greatest works ever written for the solo violin - and in performances that, for the past forty years, have held their own in the catalogue as "definitive". In the music, Bach explores everything that was possible on the violin at the time (around 1720).

For further titles in this series type 'philips 50' into search.

Fifty years on, and the mere mention of Philips Records is still enough to conjure qualities that were first acclaimed when the long-playing vinyl record was in its infancy. In those days, the Dutch Philips label was renowned for the warmth of its recordings and the supreme musicianship of its artists, many of whom went on to achieve legendary status.

Philips 50 brings the excitement of those days back to life on 50 CD re-releases, each of which is enhanced by a sophisticated audio restoration process (96kHz 24 bit technology) that extracts the maximum impact from the original tapes. And yet not everything on Philips 50 is "old". Dietrich Fischer-Dieskau's digital recording of Schubert's achingly beautiful song-cycle Winterreise with Alfred Brendel is as great a recording as any and enjoys the additional benefit of full digital sound. Valery Gergiev's rugged and spontaneous digital Kirov recording of Prokofiev's complete Romeo and Juliet ballet was widely acclaimed when it first appeared, and makes a welcome reappearance at mid-price. Then there's Mitsuko Uchida's atmospheric and immaculately sculpted reading of Debussy's 12 Etudes, classic recordings in every sense of the term, and a fine example of Philips' legendary piano sound. Zoltán Kocsis' benchmark Bartók recordings provide another.