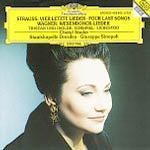 Born in Venice in 1946, Giuseppe Sinopoli began studying music at the age of twelve. He later studied both music and medicine (in which he received his doctorate), as well as, in recent years, archaeology.

In 1972 Giuseppe Sinopoli was appointed Professor for Contemporary and Electronic Music at the Venice Conservatory and also commenced studies in conducting with Hans Swarowsky in Vienna. During the 1970s, Sinopoli became known initially as a composer and he received commissions from music festivals in France, the Netherlands and Germany. His opera Lou Salomé was premiered at the Bavarian State Opera, Munich, in 1981.

Major successes in Giuseppe Sinopoli's conducting career were performances of Aida and Tosca in Venice in 1976 and 1977, and his debuts in 1980 at the Deutsche Oper Berlin with Verdi's Macbeth, and at the Vienna State Opera with Verdi's Attila. Sinopoli made his operatic debut in London in 1983 with Puccini's Manon Lescaut, and his New York debut (at the Metropolitan Opera) in 1985 with Tosca. In 1994 he gave his debut at Milan's La Scala in a performance of Richard Strauss's Elektra. He has appeared regularly at the Bayreuth Festival, and is a frequent guest at the Salzburg, Lucerne and Schleswig-Holstein Music Festivals, as well as at the great opera houses in New York, London, Milan, Vienna and Berlin. In 1990 he became Director of the Taormina Arte Festival, Sicily.

In 1994 Giuseppe Sinopoli received Italy's highest award, the Gran Croce al Merito, for his contribution to the arts and music.