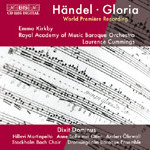 All of England - or at least the musical part of it - stood still for a couple of days in March. The reason was the discovery of a previously unknown manuscript of a Gloria by Händel in the library of the Royal Academy of Music in London - a discovery which made the headlines in the major London newspapers.

BIS has made the first ever recording of the Gloria!

The recording features the inimitable Emma Kirkby, who sings the solo soprano part. The newfound Gloria is in 7 movements and approximately 17 minutes long. It is set for soprano, strings and continuo and Emma Kirkby will be accompanied by The Royal Academy's Baroque Orchestra conducted by Laurence Cummings.

The recording took place in London on May 3, 2001. The Gloria will be coupled with another Händel work: Dixit Dominus with Hillevi Martinpelto and Anne Sofie von Otter as soloists.