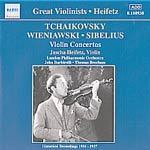 "Heifetz looms large in 2001, the centennial of his birth. An online auction house sold off a cache of Heifetz memorabilia in February, including the alligator briefcase he used to carry his music; next month, the Montreal Chamber Music Festival will devote two weeks of concerts, repertoire and films to Heifetz.

"And now in record stores on the budget-priced Naxos label are seven CDs containing many of the violinist's early concerto recordings and shorter pieces supported by some of the foremost conductors of the 20th century: Arturo Toscanini, John Barbirolli, Thomas Beecham and Pierre Monteux among them....

"The Naxos discs include almost none of the short, light works - what the critic Virgil Thomson called "silk underwear music" - that earned Heifetz some critical derision. He also was sometimes called cold and machinelike. ...

"To be sure, there's considerable charisma in the Vieuxtemps Concerto No. 4, one of the highlights of the Naxos CDs and a performance of staggering beauty. This kind of radiant playing invites the notion that Heifetz was best in light music.

"But then how does one explain Heifetz's refined, shapely reading of the Beethoven Violin Concerto, made in 1940 with Toscanini at the podium? The conductor surely was an influence, because the performance is much better structured than the violinist's later version with Charles Munch.

"Not surprisingly, Heifetz's Mozart - here it's the Concertos No. 4 and 5 - sounds dated, almost mannered. His style might have been his own, but that style was grounded in a Romantic sensibility, which isn't true of most violinists today. That's why so much of Heifetz on disc, at least when he was playing material congenial to him, is to be cherished.

"He's wonderful, for example, on the 1939 neo-Romantic concerto by William Walton, on the Sibelius violin concerto and even in the odd concerto of 1943 by Louis Gruenberg."
- Star-Tribune (Michael Anthony) May 20, 2001

"Little can be added to what's been written over the years about Jascha Heifetz's supremacy in these works, except to stress that what we have here are his 78 rpm versions of the Tchaikovsky and Sibelius concertos... the violinist's EMI traversals from the 1930s sound fine for their vintage, and the Sibelius and Wieniawski recordings are particularly well balanced. Rehearing the Wieniawski after many years, I was quite taken with Heifetz's rich, sustained phrasing in the slow movement, surrounded by first-rate solo wind playing. ...Mark Obert-Thorn's Tchaikovsky and Sibelius transfers are superior to what EMI Références issued in the late 1980s...totally listenable and well effected, and well worth Naxos' modest asking price."
- ClassicsToday.com (Jed Distler)