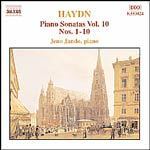 "I've started, so I'll finish." - Jenö Jandó
Quoted as "the busiest man on the keyboard" by UK's Daily Telegraph, Jenö Jandó is one of the most prolific recording
artists today.Having completed recordings of Mozart 's piano sonatas (Naxos 8.505012), piano concertos (Naxos 8.505011), Beethoven's sonatas, both volumes of Bach's Well-Tempered Clavier and Bartok's piano concertos, he is still busy engaging in accomplishing all of Haydn's and Schubert's piano sonatas.
It all began in Pecs, a quiet town in southern Hungary, where Jenö Jandó was born and taught piano by his mother. His formal studies on the instrument was at the Liszt Academy, under the careful nurture of Katalin Nemes and Paul Kadosa. After his graduation, he had a series of success in major international competitions, including the Cziffra and Ciani Piano Competitions. He believes his professional career started when he took 3rd prize at the Beethoven Piano Competition at age 18. In addition to these, he was also the winner of the 1973 Hungarian Piano Concours and took first prize in the chamber music category Sydney International Piano Competition in 1977.