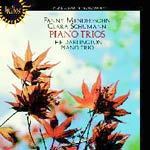 'A valuable, mind-broadening record' (The Tablet)

Fanny Mendelssohn was born in 1805, and Clara Schumann - née Wieck - in 1819. Between these dates were born no lesser figures than Fanny's brother Felix Mendelssohn (1809), Frederic Chopin and Robert Schumann (both 1810), Franz Liszt (1811), Richard Wagner and Giuseppe Verdi (both in 1813). But it was a period in which women were little regarded as professional musicians, and so it was that Fanny Mendelssohn, cushioned by comfort and wealth, found consolation in the success of her brilliant brother Felix, whilst Clara Schumann became a pianist of international repute initially through the efforts of her father, Friedrich Wieck, a man of formidable ambition determined that his daughter would succeed. Clara was later to become the loving wife of an ailing genius, the mother of eight children, and a composer of considerable attainment.

Psychologists have long speculated on the relationships both women had with men who were not their husbands. Though nothing has been proved in either case, there is little doubt that Fanny's love for her brother Felix was a force of which he himself was well aware and even dangerously played upon from time to time, though he finally (and fortunately) realised that any sort of encouragement might lead to a darker and less normal attachment. With Clara, it was her emotional ties with the younger Johannes Brahms that led to speculation, and here, once again, it seems that each witheld from developing their mutual affection beyond the platonic state.

There exists a curious coincidence in that the age gap between Fanny and Felix Mendelssohn was precisely that which separated Wolfgang Amadeus Mozart from his sister 'Nannerl'. But, whereas Mozart père greatly encouraged his daughter in public performance, the reverse was true of Abraham Mendelssohn who declared that 'only that which is feminine befits a woman'. Surprisingly, this was a point of view to some extent supported by Felix Mendelssohn, despite the fact that he was keenly aware of his sister's very great talent - to such an extent that he frequently consulted Fanny about new pieces on which he was working. This ambivalent attitude is further demonstrated by the fact that Felix, whilst admiring his sister's compositions, would not agree that she should have her songs printed, yet considered some of them of sufficient merit to be published under his own name. It is to his great credit that when they were successful he acknowledged their true authorship.

The relationship between Felix and Fanny might have seemed fatal to the chances of either finding a marriage partner, but in 1829, at the age of twenty-four and after much heart-searching, Fanny married the artist Wilhelm Hensel. They had been acquainted for six years but Hensel was formerly considered an unsuitable match for her daughter by Leah Mendelssohn. But despite all the restrictive attitudes of the day the marriage was a success and it did nothing to diminish Fanny's musical activities. In fact she was encouraged to expand them. In 1838 she was at last allowed to appear in public as a pianist, in a charity concert, when she performed her brother's G minor Piano Concerto. After this Fanny began to assert herself in terms of her music, and finally Felix, after receiving copies of several of her works lately published, wrote: 'May you have much happiness in giving pleasure to others; may you taste only the sweets and none of the bitterness of authorship; may the public pelt you with roses and never draw black lines upon your soul - all of which I devoutly believe will be the case, so what is the use of my wishing it!'.

Some dozen works by Fanny Mendelssohn were published before and after her death, but much more lies in the Mendelssohn Archive of the Prussian State Library in Berlin. She continues to be more famous as the sister of Felix Mendelssohn, but it could well be that she would have found satisfaction in that.

With Clara Schumann the situation was quite different. She began her performing career at the age of eight, playing a Mozart concerto. Her industry was rewarded by the presentation to her by her father of a new Stein piano. We learn that she was soon not only practising the normal keyboard repertoire but playing through operas such as Oberon and Die Zauberflöte. A remarkably musical child indeed! At the age of ten Clara had a meeting with Paganini which was to bring her into a circle of renowned artists, and a year later her father was approached by Robert Schumann's mother seeking advice as to whether her son's future lay in law or music. On Friedrich Wieck's advice Robert happily pursued the latter course. It was a choice which was severely to affect the lives of Wieck, Clara and Robert.

Meanwhile Clara was put to study counterpoint with Christian Weinlig, the Cantor of St Thomas's Church in Leipzig (the post Bach held for the last twenty-seven years of his life). Weinlig was a great teacher who later had as an admiring pupil Richard Wagner. Clara expanded her education by reading widely - Greek and Latin classics as well as such romantics as Byron and E T A Hoffmann.

For interested readers the immensely informative Clara Schumann - A Dedicated Spirit by Joan Chissell (Hamish Hamilton) contains many fascinating details of this great artist's life. The book includes accounts of Clara's meetings in Paris with such famous contemporaries as Berlioz.

By 1843, three years after her marriage to Robert Schumann, Clara was finding composition far from easy - as her husband readily conceded: 'Clara has written a number of smaller pieces which show musicianship and a tenderness of invention such as she has never before attained. But children and a husband who is always living in the realms of imagination do not go well with composition. She cannot work at it regularly, and I am often disturbed to think how many tender ideas are lost because she cannot work them out.'

Pregnant with her fourth child, and therefore unable to tour in the winter of 1845, Clara turned to composition and, in particular, joined her husband in a close study of Bach and Cherubini. The most remarkable outcome of Clara's industry at this time was her Piano Trio in G minor - a work which caused her much travail during its inception, as the manuscript reveals. In its final form, however, the Trio appears as a well-proportioned work, sympathetically scored for the instruments employed.

In the first movement Clara's inspiration could at times be mistaken for that of her husband. Its main theme is lyrical and its second subject chordal with engaging syncopations. A development section, seemingly effortless, reveals the composer's skill in contrapuntal writing. The recapitulation is managed with great neatness and firmly re-establishes the tonic key of G minor.

The charming Scherzo which follows employs a dotted rhythm in the manner of the 'Scotch snap'. Its trio section makes duple out of triple time as did Robert Schumann in the finale of his piano concerto. The following G major Andante never quite realises its full potential owing to its rather plain harmonisation. The agitated middle section reverts to the minor mode before a reprise in which the cello is charmingly featured in a passage of skilfully varied scoring.

The Finale, in G major, is in sonata form and shows Clara at the height of her compositional powers. Subtle reference is made to the opening phrase of the Andante, and the development section uses contrapuntal writing that would not have disgraced Felix Mendelssohn. Finally, in the coda, the tension is not only suitably heightened but also beautifully controlled.

Fanny Mendelssohn's D major Piano Trio is a late work which was published in 1850, three years after her death. Both in terms of structure and instrumentation it is a very accomplished work - not just the creation of an enlightened dilettante but also that of a gifted artist.

The opening 'Allegro molto vivace' states its bold themes with confidence. Immediately to be noticed is the sensitive way in which the piano part is blended into the instrumental texture. Notable also is the fine and sonorous shaping of the cello's bass line. The Trio is musically very much of its time and cannot but show the influence of the composer's great brother. Another influence is that of Schubert, whose music both Felix and Fanny adored.

The Andante second movement begins calmly but soon gathers momentum, and this quicker section leads logically into a most imaginative development of the movement's opening material. The third movement is rather weaker than its companions, but the Finale begins with an unexpected cadenza-like passage from the piano before the violin and cello join in the music-making. Here the musical material is rather less memorable than that employed in the opening movement, and the spreading of the piano chords is perhaps overdone, but the general handling of the medium is never less than accomplished.

On the evidence of this work one can only speculate that had Fanny Mendelssohn's short life been extended to a more normal span, a number of other important compositions might well have been left to posterity. It may even be that recordings such as this will lead to the revival of other pieces by her that are currently held in the archives of the Prussian State Library.
PETER LAMB

Complete music for horn and pianoforte