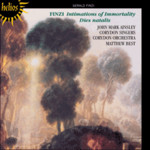 Gerald Finzi likened the creative artist to a 'coral reef insect, building his reef out of the transitory world around him and making a solid structure to last long after his own fragile and uncertain life'. 'Fragile' and 'uncertain' are the key words here; throughout his life Finzi was sharply aware of the frailty of existence; before he was 18 the deaths of his father, three brothers and his teacher, Ernest Farrar, had etched upon him life's uncertainty, and by 50 he knew himself that he was dying. This sense of transience is the most profound aspect of his art; it is heard in the exquisite cantata Dies natalis, and in the song sets A Young Man's Exhortation and Earth and Air and Rain, as well as his other songs setting Thomas Hardy, his favourite poet whose bleak fatalism accorded with his own view of the world. A further preoccupation which may be traced back to these traumatic years is the theme of adult experience tarnishing the innocent experience of childhood, manifest, for instance, in his large-scale setting of Wordsworth's Intimations of Immortality.
Finzi's music is rooted in the tradition of Elgar, Parry, Vaughan Williams and those composers in the opening decades of the century for whom, like Ivor Gurney, song writing was a principal means of expression. About two thirds of his music is vocal and this gives the clue to the most individual characteristic of Finzi's art - his response to words - which results in music that seems inevitably, and effortlessly, to be at one with the poet's thought. This bonding with the authors he set arose out of his remarkable knowledge of English literature, especially poetry. In his teens and as a young man he was introspective and solitary: books were his companions, and in authors like Hardy, Traherne and Wordsworth, he found kinship that shaped the ethos for his own life.

The songs and several short orchestral and chamber works perhaps suggest a miniaturist; however, after World War II his music widened in ambition and scope with the concertos for clarinet and cello and the extended choral canvases of For St. Cecilia and Intimations of Immortality. He was particularly drawn to the baritone voice and the clarinet was a favourite instrument; for both he wrote some of his most endearing and popular works: the Shakespeare songs Let Us Garlands Bring, and the Five Bagatelles and Clarinet Concerto which is now firmly established as a 20th century classic for the instrument as reflected by the many recordings of the work.

Striving indefatigably so that nothing shoud be lost, Finzi's energetic mind went far beyond his own compositions. He was an ardent champion of neglected composers, Gurney and Parry for example; with the Newbury Strings he revived 18th century composers like Stanley and Mudge and fostered young talent like Kenneth Leighton. He collected a unique and valuable library of English poetry, philosophy and literature whose 3000 volumes are now housed at Reading University. Not least in his orchard at Ashmansworth he rescued the stock of several English apples from extinction. For Finzi, the choice and the rare, be it music, fine writing or simply a sweet tasting apple were joys to perpetuate.
- Andrew Burn, 1994

'There have been several excellent previous recordings of Dies natalis but John Mark Ainsley's rendition is as fine as the best of them. This recent release is indispensable to the Finzi aficionado and highly recommended to all who enjoy the early twentieth-century English school of composers' (Fanfare, USA)

'I shall treasure this recording' (Organists' Review)

'The performance by tenor John Mark Ainsley and Corydon Singers weds the ecstatic to the sublime' (The New Yorker, USA)

'With such ardent, beautiful singing that communicates deep respect for the music, it's a performance to treasure … [a] ravishingly poignant release' (Soundscapes, Australia)