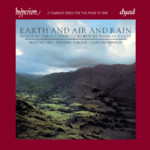 "You can't go wrong with this recording of these immensely beautiful and brilliantly-crafted songs."
(MusicWeb Oct 2010)

'These are marvellous songs' (Oxford Times)

'There are so many really subtle and distinguished performances in this set, and so much sheerly beautiful singing, that I shall be listening to it often over the years' (Gramophone)

"You can't go wrong with this recording of these immensely beautiful and brilliantly-crafted songs."
(MusicWeb Oct 2010)

Martyn Hill has established a reputation as one of Britain's leading tenors and his career has taken him to many parts of the world, working with such conductors as Ashkenazy, Atherton, Hickox, Marriner, Menuhin, Muti, Ozawa, Previn, Sanderling and Sawallisch.
His repertoire in recital, concert and opera is large, ranging from the Baroque to contemporary music. Operatic roles have included Idomeneo, Belmonte (Die Entführung aus dem Serail), Ferrando (Così fan tutte), Flamand (Capriccio) and Tom Rakewell (The Rake's Progress), while recent concert performances have included Berlioz' Grande Messe des Morts, Bruckner's Te Deum, Tippett's A Child of our Time, Britten's War Requiem, Serenade, Spring Symphony and Nocturne, and Beethoven's Ninth Symphony and Missa Solemnis. Martyn Hill has made some ninety recordings including a Schubert recital with Graham Johnson as part of Hyperion's ten-year project to record all the composer's songs, and, most recently, a CD of Tippett's songs to mark the composer's ninetieth birthday.