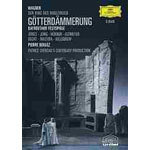 Premiered in 1976, exactly one hundred years after the first performance of the Ring as a cycle, this production has set new aesthetic standards in the interpretation of Wagner's gargantuan masterpiece

With young stage director Patrice Chéreau and musical modernist Pierre Boulez, Wolfgang Wagner had put together a dream team to find a new, modern yet timeless approach to his grandfather's work, regarding both music and staging

Filmed at great expense under the direction of Brian Large, this production has been a best-selling DVD title on Philips. Since its disappearance from the marketplace it has commanded high black market prices and there is a serious demand among dealers for a re-release