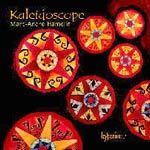 ***** Five Stars BBC Music Magazine (Jan 2002) - "This is the kind of disc that no pianist could do better than Marc-Andre Hamelin: a collection of miniature piano rarities and transcriptions. Throughout, the playing carries all the hallmarks of Hamelin on tip-top form."

"This is the kind of disc that no pianist could do better than Marc-Andre Hamelin: a collection of miniature piano rarities and transcriptions. Throughout, the playing carries all the hallmarks of Hamelin on tip-top form."
- ***** Five Stars BBC Music Magazine (Jan 2002)

'Hamelin's performances are a wonder of brilliance and refinement. The recordings are superb, Jeremy Nicholas's notes a mine of informative titbits. In Marc-André Hamelin Hyperion clearly has a pianist to turn other record companies green with envy' (Gramophone)

'In latter times a new breed of pianist has appeared, the super-virtuoso for whom no technical challenge is too much. Chief of this tribe of metamusicians is the Canadian pianist Marc-André Hamelin, whose playing defies rational explanation' … '20 delicious miniatures, some teasingly humorous, some almost impossibly fizzle-fingered … two witty etudes here by Hamelin himself, passage-work that defies the ears. The gloriously outrageous Valse Folle by Massenet, the end of which had me cheering in disbelief. This is, in short, some of the most phenomenal playing you'll ever hear' (Punch)

'Hamelin's refinement, jaw-dropping virtuosity and sense of sheer fun combine to make the whole lot both irresistible and simply unbelievable. With Hamelin around, who needs Horowitz?'(Piano International)

To all his many fans this disc is going to be 'The Best Marc-André Hamelin Album Ever' or perhaps 'The Ultimate Marc-André Album'.
The CD is a collection of the kind of wild and wacky encores that so typify Marc-André's recitals. Some are fairly well known such as the Rachmaninov and Godowsky but most are gems that have been long forgotten or, in the case of Marc's own studies, or the Kapustin, are new additions to the encore tradition. All are guaranteed to make the listener either gasp in astonishment or swoon. Look out for the Gimpel paraphrase on a tune known in the US as The Marines Hymn, this is in the tradition of Horowitz at his most brilliant; then there's our title track Kaleidoscop, written and made famous by the great pianist Joseph Hofmann, it was also much championed by Cherkassky and is another tour de force. Marc-André himself is represented by his outrageously complex take on Liszt's La Campanella and by his pastiche of a Scarlatti sonata, which is very silly indeed! But it's not all bravura, our pianist has also made an arrangement of the well known Adagio from Glazunov's The Seasons which may bring a tear to the eye, as may the nostalgia of Alt Wein. Unmissable!

Under an exclusive contract with Hyperion Mr Hamelin has recorded concertos by Alkan, Henselt, Korngold and Joseph Marx with the BBC Scottish Symphony Orchestra; Live at Wigmore Hall; discs of Alkan (Canadian Juno Award 1996), Catoire, Grainger (Soundscapes Award 1997, Australia), Liszt, Reger, Roslavets, Rzewski, 'The Composer-Pianists' from Alkan to Hamelin (Preis der Deutschen Schallplattenkritik 1997 & 1998) and the complete sonatas of both Medtner and Scriabin. His recently issued recording of the epic Busoni Concerto with the CBSO under Mark Elder has received enormous critical acclaim.

Jacques Offenbach trans. Jakob Gimpel (ed Hamelin)
Concert Paraphrase of 'The Song of the Soldiers of the Sea' [3'58]

Francis Poulenc
Intermezzo in A flat [4'02]