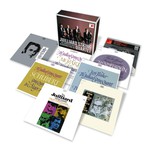 The first ever release of the Juilliard String Quartet's complete Epic recordings from 1956 to 1966 in a single 11-CD edition.

The Juilliard String Quartet have been leaders in their field for well over half a century. Their continuing legacy is celebrated by Sony Classical over eleven CDs, collecting their complete recordings for Epic Records, made between 1956 and 1966. Four of the albums have never before been released on CD.

"I do not want to give the impression that these are exhibitionist performances", wrote Gramophone in 1963. "You don't keep thinking what a wonderful ensemble the Juilliard is; you keep thinking what wonderful quartets Mozart wrote". Mozart's six "Haydn" Quartets received, on this 1962 recording, "the best performances I have ever heard", the stunned Gramophone critic wrote. Billboard agreed, writing that they "fairly glisten with the high polish of technical perfection". The Juilliard's other recordings of the classics were no weaker. "This is magnificent playing by any standard", wrote Gramophone of a 1966 album of Schubert's "Rosamunde" Quartet and his Ninth Quartet in G minor. A fine 1963 recording of No. 15 in G major is also reissued, on CD for the first time as are the Juilliard's 1964 recordings of Mendelssohn's Second and Third Quartets, and a trio of Haydn quartets, op. 54, from 1966.

The quartet's 1965 recording of Beethoven's three Razumovsky Quartets and his "Harp", op. 74, are also included in the set. So is a collaboration with another venerable artist still active today, Leon Fleisher: the Juilliard and Fleisher's rendering of Brahms' Piano Quintet dates from 1963.

The Juilliard Quartet's brilliance in 18th- and 19th-century repertoire is especially impressive for an ensemble originally formed - back in 1946 - to champion 20th-century music. This side of their work is evident from their earliest Epic album: works by the two lesser-known American composers Benjamin Lees and William Denny. Recorded in 1956 and also new to the CD format, this was among the last Juilliard recordings to feature original second violinist Robert Koff.