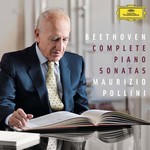 Maurizio Pollini's Beethoven Sonatas cycle reached completion after nearly 40 years, a story that goes back to June 1975, when Pollini began recording the cycle starting with two of the last three - Op. 109 and 110. The cycle concluded in 2014, when the three Sonatas op. 31 and the two of op. 49 were recorded.

"strewn with resonating pauses and impetuous cascades" The Times

Maurizio Pollini was born in 1942 in Milan. He studied the piano with Carlo Lonati and composition and conducting at the Milan Conservatory. By 1957, when he performed the Chopin Etudes in Milan, the press had already begun to take notice of him. His prizewinning performance at the 1960 Warsaw Chopin Competition was followed by a further period of study.

Since the mid-1960s, Maurizio Pollini has given recitals and appeared with major orchestras in Europe, the USA and the Far East. He made his USA debut in 1968, undertook his first tour of Japan in 1974, and today still performs regularly at the world's great international music festivals. He has also developed a great interest in contemporary works and was one of the first pianists to champion their cause. His frequent ventures into chamber music (Brahms's Piano Quintet with the Quartetto Italiano) and occasional appearances as a conductor (at the Rossini Festival in Pesaro) testify to his interest in every aspect of music. In 1995, the year in which he celebrated his 25th anniversary at the Salzburg Festival, he devised the program for a series of five concerts in which he also participated as pianist. His "Progetto" included compositions by Gesualdo, Nono, Schoenberg, Webern, Sciarrino, Beethoven, Brahms and Hindemith and constituted a highlight of the summer festival. The second "Progetto Pollini" takes place at the 1999 Salzburg Festival, where works by Ockeghem, Beethoven, Després, Schoenberg, Schumann, Machaut, Debussy, Nono, Mozart, Palestrina, and Monteverdi will be performed. In addition, new compositions - commissioned from Manzoni, Donatoni, Guarnieri and Berio by Maurizio Pollini and the Salzburg Festival - receive their premiere performances. Pollini's overwhelming success at the 1993 Berliner Festwochen with a performance of the complete Beethoven Piano Sonatas induced him to play the cycle in Munich, Milan and New York. In 1996 and 1997 he performed the cycle in Paris, Vienna and London.

Maurizio Pollini was presented with the Wiener Philharmoniker's HONORARY RING in 1987; he was awarded the GOLDENE EHRENZEICHEN in Salzburg in 1995, and in 1996 he received the ERNST VON SIEMENS MUSIC PRIZE.