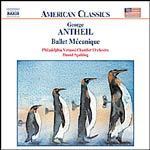 "George Antheil's infamous Ballet Mecanique exists in (basically) three versions, the first of which (for lots of synchronized mechanical pianos and percussion) has only recently been premiered and recorded for the first time by the UMass Lowell Percussion Ensemble. The version that scandalized Paris audiences in 1926 actually was an arrangement for lots of normal pianos and percussion, and this version was recreated on a long out-of-print MusicMasters disc. Daniel Spalding and his intrepid ensemble take on the composer's 1953 revision for the time-honored (via Stravinsky and Orff) ensemble of four pianos and percussion, an arrangement that reduces the score by about half while preserving the most important thematic material. It's a fine work in its own right, more conventionally "listenable" than the early versions, and it's easy to understand Antheil's desire to give the music wider currency. Spalding and his ensemble play very well indeed, and the recording balances the various special effects (airplane propellers and electric bells) in such a way that they register without ever becoming totally obnoxious.

"You can't help but feel sorry for Antheil's subsequent career misfortunes. After all, no one today seriously castigates Stravinsky for not writing more Rites of Spring, and we can only view with bemusement the cold shoulder given Antheil's post 'Mecanique' production, especially considering the fact that even this notorious work was as ignored in performance as the rest of his music. Antheil clearly recognized that, like Stravinsky's 'Rite', the Ballet Mecanique was an artistic dead end, but as this disc proves, he wrote plenty of fine music both before and after it. Take the Serenade for String Orchestra No. 1. Here's a delightful piece, humorous and lyrical, full of rhythmic energy and good tunes. The Symphony for Five Instruments very cleverly balances an unusual ensemble of viola, flute, bassoon, trumpet, and trombone, and will appeal to anyone who enjoys the chamber music of Poulenc. The Concert for Chamber Orchestra (actually a wind octet), also reeks of Stravinsky and Les Six, but you'd be hard pressed to find anything by that septet of composers precisely like it.

"In short, Antheil's neglect is completely unjustified, as this and other fine recordings now appearing on Naxos and CPO clearly demonstrate. As with the Ballet, Spalding and the Philadelphia Virtuosi Chamber Orchestra play these diverse other works with affection and relish. Naxos provides them with excellent recorded sound too. A winner in every respect, this disc should go far toward supporting the ongoing rehabilitation of this seminal figure in 20th century music."
10/10 Artistic & Sound Quality
- ClassicsToday.com (David Hurwitz) October 1, 2001

"The Philadelphia players sound as if they are enjoying themselves, and at its super-budget price it's an ideal introduction to the 'bad boy of music', who certainly wasn't nearly as bad a composer as many who've come after him."
- International Record Review (Nov 2001)

On October 4, 1923, I played in Paris for the first time…Rioting broke out almost immediately. I remember Man Ray punching somebody in the nose in the front row. Marcel Duchamps was arguing loudly with somebody else in the second row. In a box near by Erik Satie was shouting 'What precision! What precision!' and applauding…

Georg Carl Johann Antheil was born on 8th July, 1900, in Trenton, New Jersey, the son of William and Wihelmine Antheil, owners of a small shoe store. Antheil studied composition with Constantin von Sternberg and later with Ernest Bloch. Studies with Bloch ended in 1921 when a lack of money sent young Antheil to Philadelphia in search of a patron. Antheil was directed to Mrs Edward Bok, who would later found the Curtis Institute of Music in Philadelphia. Having found his patron, he began to formulate his plan to tour Europe as a concert pianist and composer.

Moving to Paris in 1923, Antheil entered into the centre of the artistic avant-garde. James Joyce, Ezra Pound, Ernest Hemingway, Man Ray, Leger, Satie, Picasso and many others were to become his friends. On 4th October, 1923, Antheil made his public début in Paris. As a result of the ensuing riot, he achieved his goal of notoriety and was established as an enfant terrible.

In 1926, Antheil gave the first performance of the work that was to mark the zenith and nadir of his career, Ballet Mécanique. Notorious for its orchestra of pianos, percussion, electric buzzers and aeroplane propellers, Ballet was a summation of Antheil's involvement with futurism. He realised that with Ballet, he had reached the end of an important period in his musical development. The première of the neo-classical Piano Concerto in Paris in 1927, signaled the halt of Antheil's popularity. Later the same year, the disastrous American première of Ballet Mécanique, left Antheil financially and emotionally bankrupt. The deliberately sensationalist promotion that preceded the concert alienated Antheil's audience, and marred his reputation in America well into the 1940s.

The 1930s were a difficult period for Antheil, who sought employment as a lonely-hearts columnist, a contributor to Esquire magazine, an author of several articles on endocrinology and later as a war correspondent. He would later write: "Here in early 1941, I could at last label myself a complete failure."

Following a move to Hollywood, Antheil experienced a musical re-birth, resulting in the composition of his Fourth Symphony in 1942. By 1946, he had reconciled his work as a film composer with his composition of "serious" music and completed many important film and concert scores. Stokowski's première of the Fourth Symphony on 13th February, 1944, helped to re-establish Antheil as an important artistic voice and the MCA Artist survey for 1947 listed him as one of the most performed American composers.

The last decade of Antheil's life was busy and successful. A steady flow of film and television scores was accompanied by a renewed interest in musical-theatre. His four late operas, Volpone (1949-1952), The Brothers, Venus in Africa and The Wish (all 1954) succeeded in synthesizing artistic discipline with a popular tunefulness, but despite enthusiastic reviews have failed to find a place in the repertoire.

Antheil died in New York City on 12th February, 1959, of a heart attack. His music was swiftly forgotten and what reputation remained rested upon a single work, Ballet Mécanique.

Writing in 1931, Randall Thompson summarised the reputation of Ballet Mécanique in his book, Modern Music: "In the popular imagination [Antheil's] music has come to symbolize the very acme of demented modernism". Antheil himself wrote much in defence of the work, alternately describing it as "the new fourth dimension of music" and an artistic dead end. Originally scored for sixteen synchronized player pianos, xylophones, drums and percussion, Antheil rescored the piece several times.

The Ballet falls broadly into three sections, with a transition between the second and third sections. The score opens loud and fast with the first main "theme" announced in the piano and glockenspiel. Rhythmically irregular and syncopated, this material will become one of the building blocks for the score. A second idea, introduced in the xylophones, and developed by the whole ensemble, constitutes another recurring motif. A third musical motif comes from what begins as a jazzy ostinato in the timpani, and cumulatively builds through the entire ensemble. These materials are fragmented, juxtaposed against various rhythmic ostinatos, finally ending in a mysterious-sounding passage featuring xylophone rolls, over gentle, repeated patterns. The second part begins with a martial tattoo on the pianos and glockenspiel, accompanied by an aeroplane propeller pedal-point. Xylophones perform a speeded up version of the opening theme, leading to a jazzy episode for the pianos. The opening material returns, accompanied by variations of the syncopated timpani ostinato. A transition featuring a sequence on the snare drum, in increasing number of eighth notes (quavers) leads into the third section. This continues the fragmentation of the thematic material, with assorted cadenzas for the pianos, accompanied by the drone of the aeroplane propellers. A reversal of the snare drum pattern, subtracting beats instead of adding them, appears in the woodblock, leading to a series of glissandos by the whole ensemble before an exciting restatement of the opening theme, ending triumphantly with a crash from the whole orchestra. While the Ballet Mécanique may have once outraged audiences, today, Antheil's score has found its place, as one of the masterpieces of the early twentieth century.

Antheil's diminutive Symphony for Five Instruments enjoyed pride of place in the young composer's output. As the first score composed following his arrival in Paris, Antheil lavished care on the composition, completing two separate versions. Of these it is the later, three-movement version that was first heard in Paris in 1924 that is performed here. Stravinsky's influence is heard throughout, especial the sonorities of Symphonies of Wind Instruments and Petrushka. The first movement opening is reminiscent of Stravinsky's Ragtime, but quickly finds it own voice with naïve, popular-sounding themes assembled in the same modular manner that Antheil was to explore in the Violin Sonatas and the Ballet Mécanique. The mysterious-sounding second movement is made more exotic through the use of use of Arabic inspired rhythms and melodies, while the finale is a bumptious, mischievous Gallop. The work closes full of Stravinskian high spirits, with a brief recapitulation of material from the first movement.

The Serenade for String Orchestra was composed in 1948, concurrently with the Fifth and Sixth Symphonies and shares much in common with those scores. The breezy first movement, in sonata form, features material related to the opening of the Fifth Symphony and includes sly references to The Battle Cry Of Freedom. The second moment, begins with a gently undulating 5/4 rhythm, and pizzicato quotations from the first movement. Mysterious tremolos accompany a series of solos and cadenzas before a return to the opening material. The third movement begins as a leaden-footed waltz in 6/8 time ending with a coda that sounds as if Shostakovich had gone to a barn-dance, before an augmented reprise of the movement's beginning.

Before returning to America in August 1933, Antheil turned his attention to the composition of chamber music, including the severe Sonatina 1932 for Violin and Cello or Pianoforte and the Concerto for Chamber Orchestra, originally titled Octet for Winds. An episodic first movement, built on Antheil's favourite "modules" comes across lean and disjointed, with the ensemble breaking off into a series of duets and trios, leading directly into the second movement. A gentle flute solo dominates the second movement, alternating with episodes in a steady, walking rhythm. The third movement begins with a literal restatement of the work's opening measures. A general reprise of earlier material takes place, changing mood and instrumentation every few bars, concluding on an extremely long held pedal-point, punctuated with bristling, dissonant chords. The Concert for Chamber Orchestra was commissioned by the League of Composers and first performed at one of the League's concerts on 6th March, 1932.

Romeo and Juliet (highlights from the complete ballet)