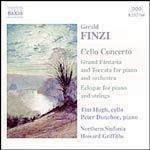 "Tim Hugh and the Northern Sinfonia communicate with depth and feeling. Hugh is recorded more as first among equals than prominent soloist, which works well" (BBC Music)

"Tim Hugh and the Northern Sinfonia communicate with depth and feeling. Hugh is recorded more as first among equals than prominent soloist, which works well... Peter Donohoe plays [Eclogue] with great charm and simplicity before uncovering a much more hard-edged and driven side in an excellent performance of the Bach-influenced Grand Fantasia and Toccata. Overall, this is a fine disc and a valuable contribution to Finzi's centenary." Performance: 5 Stars, Sound: 4 Stars
- Christopher Wood, BBC Music Magazine, November, 2001

"Tim Hugh performs the [Cello Concerto's] stormy first movement with panache, and gives the second movement a real intensity. The Eclogue for piano and strings is played with conviction by Donohoe and the Northern Sinfonia but for me the real discover is the Grand Fantasia and Toccata, a dramatic piano concerto that rebuts completely the charge that Finzi could not venture beyond pastoral melancholy."
- Ivan Hewett, The Times (London), 3 November 2001

"Tim Hugh, in this new Naxos recording, renders a beautifully shaped and gently sympathetic reading with Griffiths providing a splendidly expressive accompaniment... Donohoe goes full tilt at the excitement of its neo-Bachian Fantasia and the salty tang and jaunty swagger of the Waltonian Toccata.... At the Naxos bargain price, this is a Finzi album that is irresistible."
- Ian Lace, Fanfare, March/April 2002

Finzi had long contemplated writing a concerto for the cello and it has been suggested that he may have conceived it as a musical portrait of his wife. Sketches for the slow movement exist from the mid 1930s, and he took them up again and composed it in the autumn of 1951 in the months immediately following the diagnosis of his illness. The spur to finishing the concerto was due to a request in September 1954 from Sir John Barbirolli for a major work that he and the Halle could performed at the Cheltenham Festival the following year. Finzi wrote the other movements in the first half of 1955, completing the finale at breakneck speed. The soloist at the premiere was Christopher Bunting who had a considerable input into the writing of the solo passage-work and the first movement cadenza.

It is difficult not to think that the character of the concerto's first movement welled up out of Finzi's desperate personal circumstances. From the outset of the extended orchestral exposition the listener is plunged into music of turbulent and tragic emotions in which the composer seems to be railing against his fate. The mood is heightened by dissonant clashes of harmony and an unstable swaying rhythm that gives the movement a brooding momentum. The soloist takes up the principal ideas which are marked by the so-called 'Scotch-snap' rhythm and trills, and also introduces a contrasting song-like theme, heroic in adversity, calmer and dignified. The ending of the movement is terse; a cry from the soloist and a bleak orchestral outburst from the orchestra as if the composer is staring into the abyss.

After the emotional turmoil of the first movement, the song-like theme of the Andante quieto, breathes a quiet acceptance and resignation in music of great beauty. The manner in which Finzi allows its serenity to suffuse the movement is all the more extraordinary given that it was composed in the wake of the knowledge that had at best a decade to live. Towards the end the music rises to a climax, then cuts out to leave a poignant brass chorale, before the soloist takes up the main theme for a final tender rendition.

Was Finzi reconciled to his fate? The jocund Rondo with its life-enhancing theme and dancing accompaniment suggests so; however, it may be simply that musically he felt the concerto needed such variety and contrast. Apart from one passage where the soloist pauses briefly for reflection, the mood never falters. As in the slow movement the brass again crown the movement with the rondo theme augmented as a sonorous climax, before an elfin, scurrying coda closes the concerto.