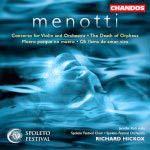 'The opening movement is one of the loveliest things Menotti has ever written... Excellent performances: Koh is outstanding, the orchestra first-class.'
International Record Review

These works by Menotti were recorded live at the 2001 Spoleto Festival, Italy.

Richard Hickox has long been a champion of Menotti's music and is currently artistic director of the Spoleto Festival, which was founded by Menotti in 1958.

Menotti has always been popular in America where his work for television, Amahl and the Night Visitors, is screened every Christmas.

The three cantatas on this disc are premiere recordings.

One of the leading violinists of her generation, Jennifer Koh has won numerous awards and honours, including the Tchaikovsky International Competition and the Concert Artists Guild Competition.

She has performed with leading orchestras throughout North America, the United Kingdom and Europe and as a prolific recitalist has appeared at venues such as Carnegie Hall, the Kennedy Center for the Performing Arts, Marlboro Music Festival, Mostly Mozart Festival and Ravinia Festival. This is Jennifer Koh's first recording for Chandos.

The Death of Orpheus Cantata
for tenor, chorus and orchestra
Jamie MacDougall (tenor)