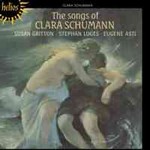 "This is a delightful issue; I shall often return to it."
- International Record Review (April 2002)

"Enchanting accounts of lovely and fascinating songs by Schumann's wife. Texts in German and English are provided too."
Five Stars ***** BBC Music Mag (May 2007)

'Anyone who cares about lieder singing and repertoire must have this disc. You can't help but fall in love with this music - and wonder why more world-class singers don't adopt these songs into their repertoire' (Classics Today)

'Stephan Loges … brings to his contributions the youthful warmth of his attractively vibrant baritone and his wonderful feeling for line and word, Lieder singing of the highest calibre … It is good to have all these songs, long hidden in libraries, available on CD' (Gramophone)

"Following her recording of the songs of Fanny Mendelssohn, Susan Gritton has provided one of the most generous and best-documented recitals on disc of Clara Schumann's Lieder." (Five Stars BBC Music)

Clara Schumann's presence in the history of European music has become firmly fixed in recent years: the many new biographies, editions, recordings and performances of her compositions testimony to her significance and influence. Her songs, not as well known as her works for piano, are among the treasures of her creative work and can take their place with the best of the German Lieder repertoire.
Except for Walzer, all Clara Schumann's songs published during her lifetime were written after her marriage to Robert Schumann and almost every song was intended as a Christmas or birthday gift for her husband.

She generally chose to set poems exploring the themes beloved by the German romantics: the beauties of nature, love, yearning, unrest, melancholy, foreboding, separation, mystery and death. She set verses of such contemporaries as Emanuel Geibel, Heinrich Heine, and Friedrich Rückert among others. One of her notable songs, Am Strande, was a translation of a poem by Robert Burns.

This disc includes all the presently known songs by Clara. (It is possible that additional songs will be discovered in the future.)