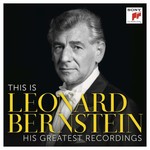 This special edition collects the conductor-composer's 15 most celebrated original albums from the 1950s and 60s on 16 CDs. The best selection of his benchmark recordings as a conductor, composer and pianist including: Stravinsky's Rite of Spring, Mahler's Third Symphony, Beethoven's "Emperor" with Rudolf Serkin, Gershwin's Rhapsody in Blue, Candide and West Side Story among others. The remasterings in this new collection are the best ever issued.of these thrilling recordings by one of the last century's greatest musicians - the perfect introduction to the work of this American genius.

"Bernstein's approach is inspirational, exceptionally flexible and completely spontaneous. The performance of An American in Paris is vividly characterized, brash and episodic." Rosette (Highest Award) Penguin Stereo Guide (for the Gershwin)

"The results are a spectacular sonic improvement of an already spectacular performance, surely one of the best and most exciting ever, in comparison with which some others may sound almost dull. The full primitive savagery of this unique work is brought out. Just to mention one sound improvement, the timpani are heard clearly and cleanly, as they would be in a good hall. Anyone who liked the original recording will love this." Classical Net (on the Rite of Spring)

"There has been a ton of Haydn since these performances, both on modern and period instruments, but it's debatable whether there have been better performances. Broadly speaking, Bernstein brings out more wit and charm than most period performances allow, and he's nowhere near as self-indulgent as many of his detractors claim...when things go right, they remain unsurpassed." Classical Net (on the Haydn Symphonies)