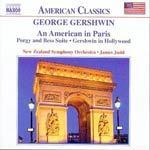 "The New Zealanders cope splendidly with the Gershwin idiom - gone are the embarrassing days when orchestras couldn't swing - and bring a catchy rhythmic zip both to An American in Paris and the Cuban Overture...The recording is vivid."
- Peter Dickinson, Gramophone July 2002

"I have to admit that this recording comes as somewhat of a surprise since one does not associate the New Zealand Symphony Orchestra with George Gershwin. After all Gershwin's music is assumed to need the special treatment meted out to it by such as Bernstein and the New York Philharmonic or Previn and the LSO. However, one would be wrong to assume this production is their inferior in any respect. Indeed as a recording it is a good deal superior. Naxos has once again shown that cheap is not worse. What we have here is a first class exposition of four Gershwin favourites (well, three favourites and one other!) recorded in wide and deep stereo. In Gershwin in Hollywood the arranger Robert Russell Bennett has produced a potpourri of five songs including the magnificent Nice Work if You Can Get it and Love is Here to Stay. The piece is the weakest on the disc as a composition but the tunes are so good that that is of no concern. The NZSO's first trumpet and first trombone show a real stylistic awareness and the orchestra swings, no small thanks to the experienced James Judd at the helm. His work with US orchestras shows throughout.

An American in Paris opens more briskly than authentically and perhaps needs more relaxation about it. The motor horns are certainly not as vulgar as one would like but, even though memories of the brasher Bernstein / Previn axis are not erased, the NZSO need fear no comparisons. The first trumpet is again excellent and Judd shows a lovely sense of space in the quiet moments. A similar feeling pervades the Cuban Overture which is neat, brisk and cheerful but somehow seems to miss the hip-wiggling I recollected from Previn. This track sent me to the shelf to listen again to Previn and, yes, he moves more, though he only takes a few seconds less than Judd over the piece. However, the primary thing that came over was how much more open and modern the Naxos recording is and since the NZSO really do get going later in the Cuban Overture one soon forgets comparisons.

The last work on this CD is Robert Russell Bennett's Symphonic Picture: Porgy and Bess, produced in 1943 when Gershwin's own suite from the opera Catfish Row was rather overlooked. Since Porgy and Bess is such a great work, and the tunes are once again the very best, this compilation works well and the NZSO sound fully at home, save perhaps for the banjo which left me feeling just a touch uneasy each time it played; the orchestra seemed to slow down a fraction to let it catch up.

Whether or not you have several other recordings of these works this disc will entertain and like me you will never again doubt the credentials of this fine antipodean orchestra. The notes by Peter Quinn are packed with interesting background and should enlighten all purchasers with the eyesight to read Naxos's microscopic print. What a great series of recordings Naxos American Classics is turning out to be!"
- Dave Billinge
(Classical Music Web)

A Night In The Tropics