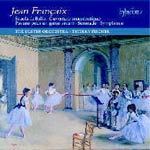 'This collection serves to remind us what 20th-century joys can be found away from the fashionable modernists. The Ulster players may not actually be French, but they fooled me. An utter delight'
(The Times)

"Again and again while listening to Thierry Fischer's ebullient performances I smile and wish that I had met Jean Francaix." (Gramophone)

'The Ulster Orchestra has acquired a deserved reputation for the strength of its sectional work and the quality of its soloists, both aspects of performance that come to the fore in Françaix … Highly recommended' (Fanfare) 'thoroughly entertaining and immensely intelligent' (Evening Standard)

'The recording, as always with Hyperion, is clear and bright, with great presence. The Ulster Orchestra under Thierry Fischer play with panache and, where asked for, with sensitivity' (Gramophone)

The gentle urbane art of Jean Francaix, at once freshly engaging and invariably distinguished by an unerring sense of style, has endeared itself to successive generations of musicians and music-lovers. His death in 1997 at the age of 85 removed from contemporary music one of its most immediately appealing and distinctly Gallic masters.
This alluring orchestral music undulates between the dreamy and the dramatic, exemplifying Francaix's attractive use of sound colour and harmonies. The Scuola di Ballo, a ballet in one act, is based on music by Boccherini, largely from his quintets. The Pavane pour un Génie vivant was written to mark the fiftieth anniversary of Ravel's death, and the Symphonie was written in Haydn's memory. The Sérénade has neoclassical overtones, and the Ouverture anacréontique attempts to portray an imaginary world, without wars, in which all is well. The content therefore is largely retrospective, but remains charismatically original throughout.

Compelling listening, enthusiastically and empathetically played by the Ulster Orchestra, under Thierry Fischer.